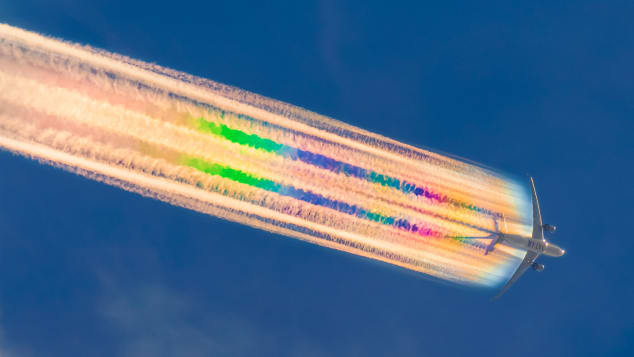 Coffee Conversation,News from around the World
(CNN) — An airplane speeds through the clouds, a trail of technicolor contrails following behind, illuminating the sky in dazzling rainbow shades.
This incredible moment was captured on film by Brisbane-based Australian photographer Michael Marston, who posts eye-catching aerospace imagery and video on social media.
Marston began snapping shots of airplanes about three years ago. His partner, Tracy, is a Qantas flight attendant and Marston thought it’d be pretty neat to capture a photograph of a plane she was staffing flying across the moon.
He started experimenting with solar and lunar photography, and soon began observing other aerospace phenomena.
“I noticed that planes look very pretty when they go overhead with the right atmospheric conditions — they produce rainbows behind them, with the vapor,” Marston tells CNN Travel.
When an airplane is flying at high altitude, there’s a decrease in pressure and the temperature of the air drops, explain experts at the Institute of Atmospheric Physics at the German Aerospace Center. If there’s enough moisture in the air, the vapor forming behind the aircraft freezes, generating ice crystals.
Scientists from NASA say the ice crystals form when cold air condenses around particles from the plane’s exhaust.
The remarkable rainbow effect happens when the crystals are aligned at the right angle with the sun, explains NASA.
On June 2019, Marston shot video footage of this marvel, capturing the moment when a Qatar Airways Boeing 777 flew over Brisbane, with stunning rainbow contrails.
This wasn’t the first time Marston took photographs of rainbow contrails, but it’s the first time he captured it on video.
Link: https://edition.cnn.com/travel/article/airplane-rainbow-trail-photos/index.html