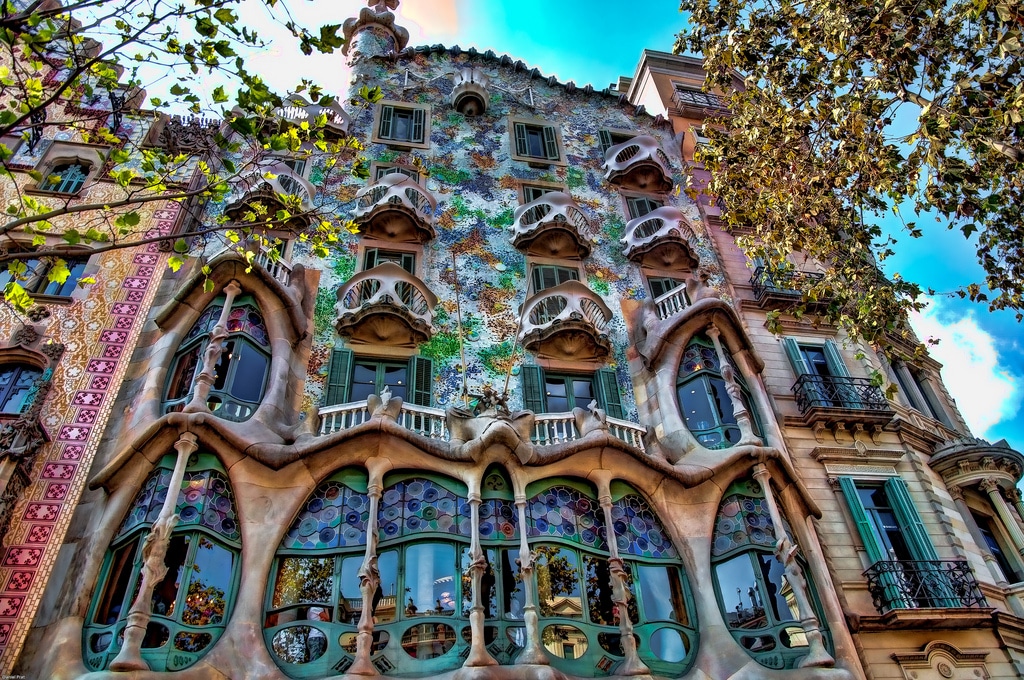 Barcelona, the cosmopolitan capital of Spain’s Catalonia region, is defined by quirky art and architecture, imaginative food and vibrant street life. It has medieval roots, seen in the Gothic Quarter, but a modernist personality represented by architect Antoni Gaudí’s fantastical Sagrada Família cathedral. Its restaurant scene ranges from fine dining to tiny tapas bars. Barcelona’s to-do list is as plentiful as its sunny days.

Below, our list of the very best things to do in Barcelona for when it’s time to go back.

LA SAGRADA FAMÍLIA, Antoni Gaudí’s unparalleled Unesco-listed monument inspires awe by its sheer verticality, it’s still under construction. Work began in 1882 and is hoped to be completed in 2026, a century after the architect’s death.

CATEDRAL DE BARCELONA or Cathedral of the Holy Cross and Saint Eulalia, housed some 2,000 years a Roman temple.

CASA BATLLÓ, called the “House of Bones” created by Antoni Gaudi and influenced by nature and has no straight lines (because they don’t exist in nature, as per Gaudí), stone pillars that contort like animal bones, and a tall ocean-blue stairwell.

PARC DEL LABERINT D’HORTA, its labyrinth is definitely the standout feature, a maze made of elaborate swirls of thick foliage.

LA RAMBLA, Barcelona’s most famous street and its one of the main arteries of the city — is nearly one-mile (1.2Km) pedestrianized boulevard from PLAÇA CATALUYNA to PORT VELL. It is still the strolling route for the city’s visitors offering the charm of the old-school florists, gelaterías, and candy stalls offering bites of crema catalana along the way.

SANT PAU ART NOUVEAU SITE, built by the legendary Modernist architect Lluís Domènech i Montaner featuring Catalan Art Nouveau with extravagant domes, stained glass windows, epic pillars; with grounds scented by the medicinal fragrance of lavender, laurel and lemon. It was designed as a hospital that could heal by the power of its aesthetics.
BARCELONETA is a traditional district of Sailors & fishermen and 5km stretch of beaches. Millions of tons of sands were pumped onto 02 miles of shoreline lifting Barcelona into the rank of the world’s great beach cities.
CAMP NOU, Barcelona Football Club Stadium (largest in Europe and the 2nd biggest stadium in the world)
The “Kiss” Mural
EXPIATORI DEL SAGRAT COR or Sacred Heart church and the Tibidabo mountain
SANTA MARIA DEL MAR
PICASSO MUSEUM
OLYMPIC VILLAGE at the Sea Front: Water Sports, Discotheques, Bars …a place in effervescence

MONTJUIC is a mountain inside the city. A true bowl of Air. Hillsides covered with flowers, exotic trees & giant Cactus. The luminous fountains of Gaieta Buigas created magic environment.

LA RIBERA is a small village in the city, a very Authentic one. It forms with Barrio Gotico the Old City. (You can see Violin Makers, Glass Makers & Designers. Pensioners play cards, young people discuss at the edge of the fountain).

MONTSERRAT, the sacred saw-toothed Montserrat Mountain Range; its Monastery and 16th century Renaissance Basilica where you will view La Moreneta, known as the Black Madonna, the Patron Saint of Catalonia and a pilgrimage site.

DID YOU KNOW?
1. Millions of tons of sands were pumped onto 02 miles of shoreline lifting Barcelona into the rank of the world’s great beach cities.
2. 7 out of 9 UNESCO WORLD HERITAGE SITES in Barcelona waere created by Antoni Gaudi, called God’s Architect. And they are: