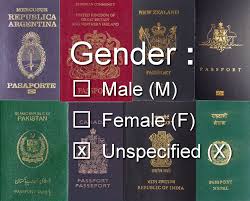 The gender-neutral ‘X’ designation is finally becoming a third standard option on US passports. It is available without medical documentation, and even if their gender is different on other government issued documents.

It begins on April 11. The option of a third gender on US Social Security records will start later this year, As part of White House’s policy changes, the Transportation Security Administration (TSA) will be implementing new procedures and new scanners to better serve trans and nonbinary travelers.

Transgender activist says it’s time for all airlines to revise their gender categories.

In an effort to be more inclusive, Air Canada plans to drop gender references when welcoming passengers. That means no more onboard announcements opening with, “Ladies and gentlemen.”

The move follows a growing awareness and acceptance — including in the travel industry — that some individuals are non-binary, meaning they don’t identify as male or female.

An excerpt from an Air Canada employee memo announcing that passengers will soon be greeted with the gender-neutral term ‘everyone’ instead of ‘ladies and gentlemen.’ (Air Canada)