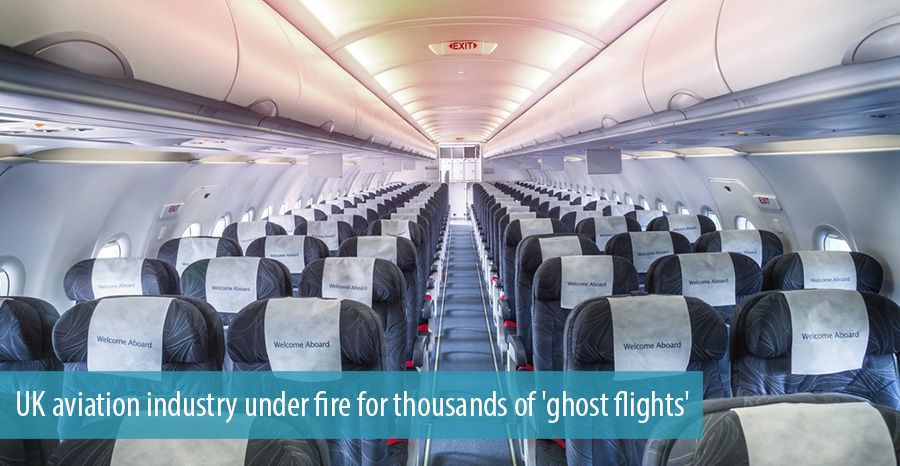 There are still hundreds of so-called ‘ghost flights’ taking off from UK airports each month.

Between October and December 2021, there were 500 ghost flights a month according to a freedom of information request obtained by the Guardian

A ghost flight is one that flies empty or under 10% of capacity.

Almost 15,000 ghost flights have flown from the UK since the start of the pandemic.

Normally airlines must use 80%:of their allotted slots, although this had been reduced due to the pandemic.

A petition was presented to parliament earlier this year demanding an end to ghost flights.

“If people choose to fly less for environmental reasons – as we are campaigning for them to do – we would expect the market to reflect that,” Anna Hughes, director of Flight Free UK, said earlier this year.

“If planes continue to fly empty because they are concerned about ‘use it or lose it’ rules, it doesn’t allow the market to adapt to shifting demand.”

Last week, the derision of climate activist Greta Thunberg brought international media attention to the empty, gas-guzzling “ghost flights” crisscrossing the EU for no purpose other than to fulfil arbitrary quotas imposed by the European Commission. German airline Lufthansa shared that it will run 18,000 “extra, unnecessary” flights this winter solely to maintain its takeoff and landing slots at airports across the EU. Given that the average European flight produces 400 kg (0.44 tonnes) of carbon dioxide per passenger and assuming an EU average of 133 passengers per flight, those 18,000 flights are poised to emit over one million tons of CO2 into the atmosphere – enough to power over 100,000 homes for a year.

All this waste is for nothing: these empty flights are taking off to protect airport slots, endangering the planet by sending glimmering emissions into the ether. According to global International Air Transport Association (IATA) regulations, under normal circumstances, airlines must fly 80 percent of their planned schedules in order to maintain their takeoff and landing slots. Of course, the COVID-19 pandemic and its attendant travel restrictions thoroughly derailed the industry and its typical operations. While the IATA has relaxed virtually all slot requirements globally, the European Commission has “adopted a more limited alleviation,” only lowering the so-called 80 percent rule to its current level of 50 percent – it is set to ratchet up to 64 percent in March.

Hardly known for its efficiency, even the United States seems to have a more practical grip on the situation: while takeoff and landing slots are only utilised by three US-American airports, the system was waived by the Federal Aviation Administration (FAA) at the start of the pandemic and has been suspended through March. As high-income countries like the US and international aviation bodies like the IATA abandon an outmoded system in a moment of global crisis, the EU seems determined to cling to its clearly unreasonable and carbon-heavy regulations.

In response to criticism, the European Commission doubled down on its choice to back the 50 percent quota, citing “the needs of airport operators, passengers and airlines.” As millions of tonnes of CO2 are pumped into the atmosphere out of negligence, it becomes increasingly clear that the EU does not take the climate crisis seriously.

While “ghost flights” are making headlines today, rightly drawing attention to the political apathy and senseless waste at the heart of so much pandemic and climate-related policy, it is easy for some important, and perhaps even inspiring, context to get lost in the haze. “Ghost flights” are but one consequence of a flagging global aviation industry, which has been brought to its knees by the pandemic: since early 2020, its growth has entirely dropped off – and so have its CO2 emissions.

In 2020, departing European flights plummeted 54.5 percent and emitted 56.9 percent less CO2 than the year prior. In 2021, compared to the same 2019 levels, these figures rebounded slightly: flights dropped 45.3 percent and emitted half the amount of CO2. Ultimately, pandemic-related declines in European aviation saved 106 million tonnes of CO2 from entering the atmosphere throughout 2021. To put this figure in perspective, here is a non-exhaustive list of things that produce 106 million tons of CO2 each year: the global pet food industry, the 55 billion cubic metres of gas set to be pumped through the impending Nord Stream 2 natural gas pipeline and the entire country of Qatar.

Now, it is unrealistic to expect these figures to stay anywhere close to where they are today and it’s only a matter of time before demand for air travel increases to pre-pandemic levels. However, the past two years have provided an example of (forced) degrowth for the airline industry that has led to very positive externalities for the planet. If anything, perhaps European over-reliance on air travel, like so many other aspects of everyday life that the pandemic has called into question, is ripe for reassessment. Like an eerily timed BBC article from February 2020 asks, “should we give up flying for the sake of the climate?” Maybe – from the perspective of January 2022, it sure seems a lot more possible.