11 Picture-Perfect French Villages You Can Quickly Reach From Paris 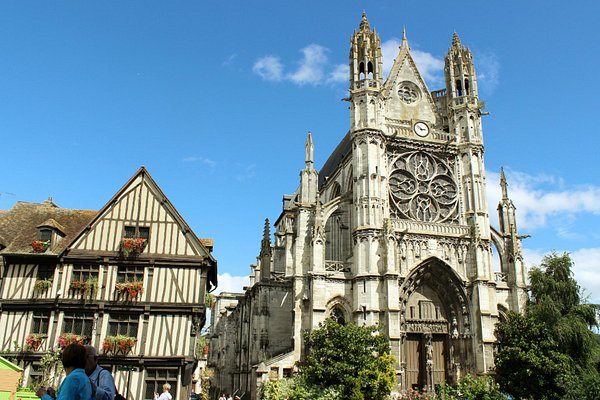 11 Picture-Perfect French Villages You Can Quickly Reach From Paris

A quick train ride from the French capital will whisk you away to these idyllic villages.

One of the most popular attractions of France is its delightful villages. Nevertheless, it can be challenging to squeeze Provence or Burgundy into a short trip. Fortunately, one doesn’t have to travel far from Paris to savor French village life. Leave your suitcase at your Paris hotel and hop on a local train to visit these beguiling medieval hamlets, royal towns, and former artist haunts. Indulge yourself in some of the best day trips from Paris.

One of the loveliest medieval villages in all of France lies within a verdant valley east of the capital. A former fiefdom of the Counts of Champagne, Provins rose in importance in the Middle Ages courtesy of its position on European trade routes and its renowned fairs. The wealth brought in by its commerce was used to construct sturdy city walls, spacious merchant houses, Gothic churches, and the Tour César fortress. Much of this heritage has survived the centuries, earning Provins a position on the UNESCO World Heritage Site in 2001. Its tradition of fairs also lives on to this day via lively Medieval-themed fairs held in June and December.

INSIDER TIP: There are hourly direct trains from Gare de l’Est to Provins (Line P), a journey which takes an hour and 20 minutes

Decades before the Impressionists took to painting en plein air, an earlier generation of artists began immortalizing the fields and country folk around this picturesque village southeast of Paris. Among these were Corot, Millet, Rousseau, and Daubigny, who formed what became known as the Barbizon School, a movement that advocated Realism in art. Barbizon later attracted Monet, Renoir, and Sisley, before they moved their easels to other destinations around Paris. A number of their former studios and lodgings, like the Auberge Ganne, can be visited. After touring these, you can hike through the fields which inspired them or extend your day at the nearby Château de Fontainebleau.

INSIDER TIP: It’s 40 minutes by train from Gare de Lyon to Fontainebleau-Avron (Line R), then take bus 21 or a taxi to Barbizon.

Bordering the Fontainebleau forest and hugging the Loing River is this enchanting village. Its quaint churches, medieval gateways, half-timbered buildings, and riverside mills also inspired the Impressionists, in particular Alfred Sisley. The prominent artist spent the last 20 years of his life living and painting in Moret-sur-Loing, which you can learn more about on self-guided walks through town.

After your art fix, you can enjoy various outdoor activities, from canoeing or kayaking on the Loing to hiking or biking the dozens of trails that depart from the village (bike rentals are available at the tourist office).

Further along the Loing River is this lovely town whose roots go back to prehistoric times. Nemours’s 600,000 years of history are well documented in the Ile-de-France Prehistory Museum or can be taken in on a stroll around the town. Your amble will take you down charming cobbled streets, past graceful Gothic churches, and to its formidable Medieval castle, now a museum.

Finish off along the bucolic river⁠—on foot, bike, or kayak.

Although it might seem sleepy today, this hilltop village south of Nemours was a powerful town back in the Middle Ages. An influential crossroads of commerce and home to a residence of the Kings of France, Château-Landon also developed into a prominent religious center as the final resting place of the revered Saint Séverin. An abbey built in his honor still crowns the town, which can be visited from the outside, and numerous other medieval sites around town. You can carry on soaking up the village’s tranquil ambiance with a walk along the Fusain River, where you can admire a historic washhouse, ancient mills, and pretty views up towards town.

On a side note, Château-Landon has a special connection to one of Paris’s most famous sites; the unique white travertine stone from its quarry was used in the construction of the Basilica of Sacré-Cœur.

INSIDER TIP: The journey is an hour and 15 minutes from Gare de Lyon (Line R) to Souppes-Château-Landon, then take Express Bus 34 to get to the town center.

Every year thousands of people descend the train at Vernon station and hop straight onto the shuttle bus to Claude Monet’s house and gardens in nearby Giverny; however, this beautiful village has a lot to offer in its own right. Hundreds of years before the arrival of the painters in the late 19th-century, Vernon occupied a strategic location on the border between the Duchy of Normandy and the Kingdom of France. Evidence of this era remains in the 12th-century castle, the formidable Tour des Archives, and the impressive Notre Dame Collegiate Church. The streets surrounding the church have some half-timbered houses or, for a more impressive sight, seek out le Vieux-Moulin, a 16th-century watermill sitting precariously above the Seine on the remains of a bridge. To view Impressionist perspectives of the area, stop at the Musée Alphonse-Georges Poulain, where several original Monet paintings are on display⁠—something you can’t see in Giverny.

Although Giverny usually steals the limelight as the artist destination near Paris, this village north of the capital attracted its fair share of paintbrush-wielding artists, most famously Vincent van Gogh. The troubled artist spent the last months of his life in Auvers-Sur-Oise, capturing its residents, buildings, and neighboring fields in over 70 paintings. The town has made it easy to walk in the Dutch painter’s footsteps thanks to panels at the various sites he commemorated on canvas, many of which now hang at Paris’s Musée d’Orsay. You can visit or have a meal at the inn where he lodged, l’Auberge Ravoux, see his grave at the town’s cemetery or tour the studios and homes of the other artists who were equally inspired by Auvers. Many of the village’s sites close in the low season, so plan to come from April to October.

INSIDER TIP: On weekends from April to October, there’s a direct 40-minute train from Gare du Nord to Auvers-Sur-Oise, which departs around 9:30 am and returns at 6:30 pm. Otherwise, there are regular hour-long trains from the Gare du Nord (Line H) with a change at Persan-Beaumont.

This pretty town northeast of the capital has impressive remains chronicling its 2,000 years of history. Senlis boasts some of northern France’s best-preserved vestiges of Gallo-Roman times, including sections of its city walls, defensive towers, and arena. The town continued to prosper over the centuries, as seen in the imposing Romanesque to Renaissance cathedral, many half-timbered houses, 18th-century mansions, and the unique Royal Chapel of St. Frambourg with stained glass windows by Joan Miró. Since it’s on the way, you can combine a visit to Senlis with the sumptuous Château de Chantilly.

INSIDER TIP: Take the TER train from Gare du Nord to Chantilly and then bus 15 or 645, a total journey of an hour.

This former haunt of the Impressionists is tucked away in the western suburbs of Paris. On summertime afternoons, you could find the likes of Monet, Sisley, Morisot, and Renoir swaying on the dance floor of its relaxed riverside bars, an ambiance beautifully captured by Renoir in his 1883 painting Dance at Bougival (Museum of Fine Arts, Boston). After wandering through the streets of the quaint village, which are especially scenic in the Saint-Michel quarter, you can relive its artistic heyday by tracing the Impressionists’ palettes along the Seine and the Ile de la Chaussée island, guided by placards. The serene setting attracted other creatives, such as novelist Alexandre Dumas and composer Georges Bizet, who worked on Carmen at his riverside villa.

INSIDER TIP; Direct trains from Gare Saint Lazare (Line L) to Bougival take 30 minutes. From the Bougival station, Bus D can transport you to the historic center or to and from the RER A station at Chatou-Croissy.

Hidden within the fields and forests of the Chevreuse Valley is this idyllic hamlet. Dominated by the Medieval Château de la Madeleine, Chevreuse’s cobblestone streets, small cottages, and stone bridges spread along the Yvette River. The village is a perfect stop on a day of hiking through this protected natural park, which contains pristine woods, flowering meadows, several other adorable hamlets, the 18th-century Château de Breteuil and the 12th-century Vaux de Cernay Abbey, the remnants of France’s largest Cistercian monastery (closed for renovations until 2023).

INSIDER TIP: It’s a 50-minute journey on RER B to the Saint-Rémy-lès-Chevreuse. The village is a 30-minute walk or take bus 39-17.

Found 50 kilometers west of Paris, Montfort l’Amaury is the chicest village surrounding the French capital. A prestigious royal town in the Middle Ages, it regained its glory in the 20th century as the countryside getaway for French celebrities ranging from singer Charles Aznavour to designer Philippe Starck. In addition to trying to peer over the walls of the village’s glamorous residences, you can meander its narrow lanes lined with climbing roses, admire the stained glass windows of the Saint-Pierre church and climb up to the decaying castle, which affords gorgeous views of the town and surrounding countryside.

INSIDER TIP: There are direct trains from the Gare Montparnasse (Line N) to Montfort-l’Amaury-Méré, which takes 35 minutes.