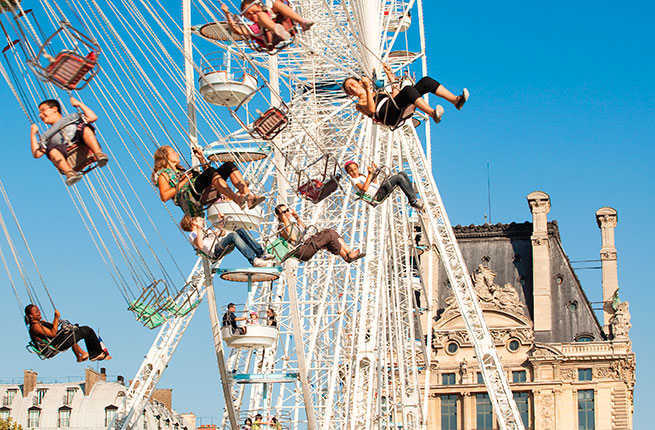 Paris’s streets are lined with so much, it’s hard to plan an itinerary. Here’s our list of what you can’t miss, whether you’re an art lover, a history buff, or a serious shopper.

Located in the heart of the 6th Arrondissement, the famous Jardin du Luxembourg is an inviting green oasis. Have romantic strolls, picnics, jog, play pétanque or admire the mash-up of English, Italian, and French landscaping influences.

The most-visited museum in the world. The former royal palace is now the magnificent home of some of the world’s most iconic artworks. It houses around 38,000 artefacts including Mona Lisa, Venus de Milo.

The pinnacle of Napoleon III architecture, the resplendent Palais Garnier opera house is opulent from every angle. The facade is covered with ornamentation and busts. L’Harmonie and La Poésie, the two gilded copper statues flank the entrance. Admire the iconic lobby’s Grand Staircase, a triumph of decadent Parisian design. Admission costs about 14 euros, but worth every penny.

The Palais-Royal complex is in some ways Paris in a nutshell: shops, cafés, art, history, architecture, bureaucracy, and spectacular gardens. Located across the street from the Louvre. Don’t miss the Insta-famous Colonnes de Buren art installation in the inner courtyard.

This sprawling, spectacular park is the beating heart of Paris’ public spaces. It stands proudly between the Louvre and Place de la Concorde, and along the Seine’s Right Bank in the 1st Arrondissement. Tuileries Garden (“Jardin des Tuileries”) has a long impressive history: from its inception as an aristocratic playground (16th century), to becoming a public space (17th century), to serving as the site of numerous French Revolution combats (18th century). With more than 55 acres (0.22km), the park offers plenty of room to stroll and lots of photo ops. Keep an eye out for Auguste Rodin’s iconic “Le Baiser” (“The Kiss”) on the West Terrace.

The Arc de Triomphe was commissioned by Napoleon in 1806 to celebrate his victory at the Battle of Austerlitz. Climb the nearly 300 steps to the top for some of the best views of Paris, with clear vistas straight down the Champs-Élysées all the way to the Louvre.

Panthéon, the gorgeous neoclassical architecture is designed by Jacques-Germain Soufflot in 1757. It began as a replacement to the original Church of Sainte-Geneviève. Visit the final resting places of Victor Hugo and Marie Curie. Marvel at Foucault’s Pendulum, tracing the path of the Earth. The vibe in the crowd is a mix of awe, reverence, and curiosity.

There’s a reason Chanel holds its runway shows in the nave of this stately Beaux Arts museum-exhibition space, which is all done up in glass, stone, and steel. An emblem of French grandeur and architectural prowess. Originally built as an exhibition hall for the World’s Fair of 1900, today the Grand Palais hosts legendary fashion shows, theatrical performances, sporting events like the Saut Hermes, food and literary festivals, and temporary artistic exhibitions. With its glass dome, visible from far across the river, the Grand Palais is a must-visit cultural destination in Paris.

The Palais de Tokyo is the largest center for contemporary art in Europe. Opened in 2002, its mission is to celebrate living artists across multiple disciplines. As part of the renovation of the building, the 1937 structure was stripped back to the original concrete… Visitors should start their exploration in the subterranean levels, where large-scale graffiti works are on display, and end with a drink at Les Grands Verres.

Musée d’Orsay is the second-most-visited museum in Paris. … wander among masterworks of Degas, Cézanne, Manet, Renoir, and Monet.

The Philharmonie de Paris is a striking contemporary building, designed by Jean Nouvel and opened in 2015. It is located within the Cité de la Musique complex in the Parc de la Villette. The building breaks with all the design conventions of traditional symphony halls, favoring pod-like boxes inside the theater, a stage in the round, and an undulating metal façade.

Opened to the public in 2014, the Fondation Louis Vuitton is a newbie in Paris’s cultural scene—but it arrived with a bang. Star American architect Frank Gehry designed the building, which looks like a magical sailboat afloat on a man-made lake in the Bois de Boulogne. Thanks to the spectacular architecture and blockbuster exhibitions, the museum is bustling at all times, despite its location in the far-western 16th Arrondissement.

The Hôtel Salé alone is reason to visit, but of course the real draw is Picasso’s oeuvre….The museum is centrally located in the bustling Marais, so it’s easy to work the Musée Picasso into a day out shopping and dining.

The Musée du Quai Branly-Jacques Chirac is perhaps best known for its unusual design by Jean Nouvel. The exterior of the building almost seems alive with plant walls and wild gardens. The modern structure stands in sharp contrast with the treasures housed inside: ancient art and artifacts and relics of bygone civilizations.

When the Centre Pompidou opened in 1977, it was a radical (and controversial) design for a museum—all industrial pipes and open glass views of Paris. Forty-plus years later it’s the undisputed grande dame of Paris’s contemporary art world. Within the massive 100,000-piece collection that stretches back to 1905, you’ll find everything from Picassos to video installations.

Sacré-Coeur is a Catholic basilica that sits on the highest hill in Paris, in the Montmartre neighborhood. Its height is topped only by the Eiffel Tower. The basilica’s distinct white travertine façade gives the Romano-Byzantine structure a unique look among Parisian monuments.

Auguste Rodin lived in the Hôtel Biron in the later stage of his life, where the gardens inspired some of his work. The former home opened as a museum to the public in 1919, almost 200 years after it was built for a wealthy financier. … the large gardens showcase his most famous bronze sculptures, like “The Gates of Hell” and “The Thinker.”

The Institut du Monde Arabe is an iconic building, designed by Jean Nouvel. The light dances in and around the building, which hosts a rotating selection of art, exhibits, performances, workshops, and cultural events.

Gustave Eiffel’s controversial fashioned-iron mesh tower has been polarizing Parisians since its inception in 1889 for the World’s Fair. The structure anchors one end of the expansive Champ de Mars. Jules Verne, the second-floor restaurant, is a Michelin-starred (and pricey) institution, as is the tiny Champagne bar at the top.